The search for Western Australia's next Tim Winton entered the classrooms of 6 primary schools in Ellenbrook in 2011 with the creation of the Ellenbrook Lions OZ Read program.

Prior to that, in 2010, the Ellenbrook Lions realised that it seems many of the things that exemplify Australian society, a fair go, a sense of humour, courage, accepting challenges, supporting others, may well be lost as we are swamped by the values presented in popular television and media programs, imported from overseas.

To meet this challenge, the Club, in partnership with Dr. Neil MacNeil, Headmaster of the Ellenbrook Independant Primary School, and his Librarian, Jayne Moore, undertook to promote cultural awareness and students literacy skills and knowledge, by providing class teachers in all primary schools in Ellenbrook and surrounds with the resources to facilitate these important Australian outcomes.

At that time, Headmaster Dr.Neil MacNeill, said, "he hoped the agreement would help grow the next generation of writers".

"Ellenbrook and surrounds is a developing community that is being established with a huge collection of people from across the world,

Dr MacNeil said. "It was felt that all students needed to be exposed to Australian literature and the underlying cultural values to help in the community building process".

Since 2011, and again this year, Ellenbrook Lions has championed this cause of Australian values that hold our society together.

In 2014, we expanded it to include another 2 schools making the total 12

In 2016, we expanded it to include another school making the total 13

In 2017, we have expanded it to include another school making the total 14

To date we have donated $12,600 for the purchase of the books for the schools.

Each time a school is presented with them, they receive a pack of books with a total value of $200.

The following are the primary schools involved:

This year, 2017, we are in the process of presenting new sets of books to all of the above schools

Pictured below with Lion Ron, are Dr. Neil MacNeill, with his Librarian, Jayne Moore, who does a fantastic job in sourcing the books for Ellenbrook Lions. 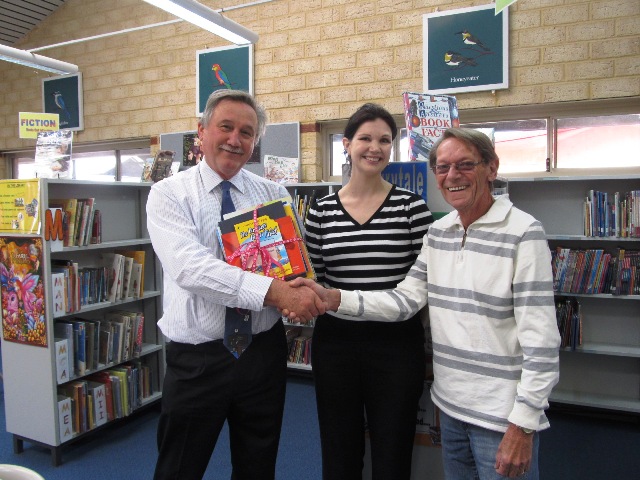 Lions are people who get involved in humanitarian efforts locally, nationally, and internationally.

People like you can find community service and volunteer opportunities in Lions through: